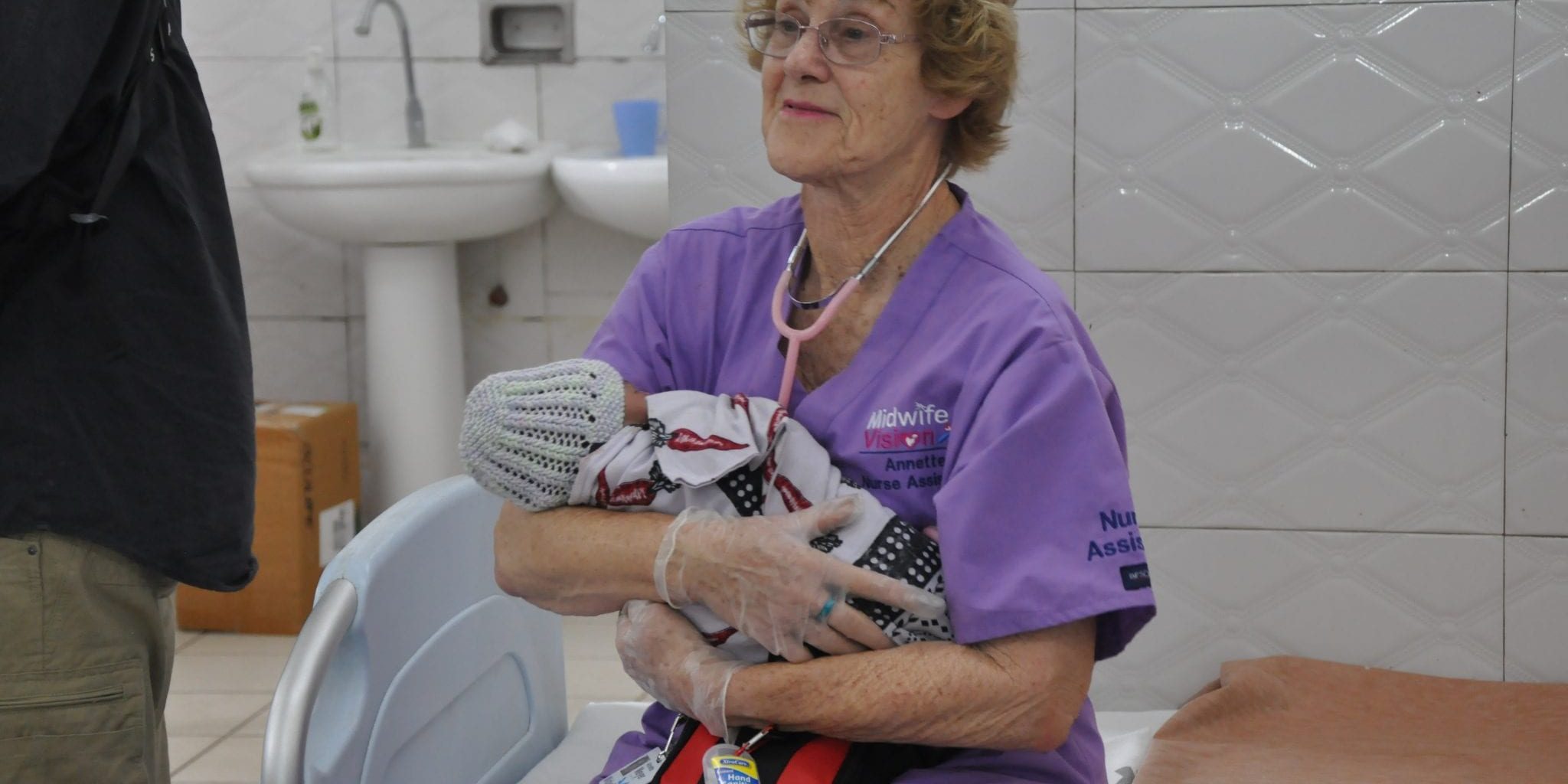 Sister Annette or Sister Netty first volunteered in Tanzania in 2017 and helping refurbish the labour ward, cleaning toilets, putting together equipment, sweeping floors and handing out free hugs to Mamas and babies. She decided she wanted to come back and do more. Without a formal medical qualification, she cannot work in the medical areas of the hospital so at a ripe age of 77-something she went out a got all straight A+’s for her nurse’s assistance course in New Zealand. She was an invaluable part of the team and hopes to return again in the future.

From the thoughts of a nurse’s assistant in Tanzania.

I first visited Tanzania in 2017 with the Midwife Vision team of helpers. I helped to clear out, scrub, and disinfect a disused operating theatre so that it could once again be used. Despite the mosquitoes and the heat, I enjoyed the experience, and I loved being involved in such a dedicated team. However, I knew I wanted to be more involved with the mammas and the babies if I came back again. So, I enrolled in an online Nurses and Patient Assistant course, and gained a certificate which allowed me to work in the labour ward, working alongside the dedicated midwives, helping and supporting them. I also downloaded a learn Swahili app and I set about learning as many words as I could.

During my first days in the hospital it was rather daunting, as I was asking to bring ‘a bag and mask’, a ‘kiwi’, a ‘moyo’, a ‘cord clamp’, ‘obstetric gel’, ‘write a label’, ‘give that baby some glucose’, ‘take that mamma’s temperature’, ‘take that mamma’s blood pressure’, ‘bring me some Savlon’, and many other tasks so necessary in the labour ward. I felt really special to be allowed to watch a birth for the first time. But as days went on, I became more involved in interacting with the mammas, watching over them as they struggled on with labour pains, and the I soon became more familiar with the requests from the midwives, and settled in to my tasks with more confidence.

While I carried on with my small tasks, the midwives dealt with each and every birth with such calm and kindness, murmuring encouragement and comforting words, administering pain relief, and ensuring each mamma was as comfortable as she could be. It was so rewarding for me to rub a mamma’s back, to stand and hold a mamma’s hand and comfort her as she endured the pain of child birth.

Even more rewarding was to rub dry a new born baby and hear its first cry, to weigh it, and to dress it in the beautiful knitwear, and wrap it in a blanket donated by the many, many caring knitters from Australia and New Zealand. It was heart-warming to see the look of delight on a mamma’s face when she was shown her new baby dressed in these lovely outfits. If you just knew how much this knitting is appreciated by the mammas. So, keep knitting all of those wonderful people. I was particularly moved when an exhausted mamma, after giving birth, grabbed my hands and kissed them again and again, saying Asante sana, Asante sana (thank you very much, thank you very much). All I did was rub her back and hold her hand as she suffered each contraction.

In the second week I became more involved in recording data on the babies’ and mothers’ records, learning where to write the medication administered, blood pressure and temperature readings. I particularly remember one situation when one mamma gave birth to a healthy baby, but in doing so, ruptured her cervix. Her bed soon became surrounded by doctors, midwives and nurses as the mamma’s condition became a concern. As a senior midwife called out mediation administered, blood pressure and pulse readings, I recorded this vital information on the mother’s chart. When the blood pressure became worryingly low, I found myself there right beside this mamma, standing in blood, watching up close the doctor working furiously to stitch everything back in place, I squeezed the blood bag as hard as I could to get the vital blood into this mamma as fast as could be. Thanks to those skillful and caring doctors and midwives that mamma’s life was saved.

It has truly been a wonderful experience, and I am already thinking about the next time I come. However, I plan to learn a lot more Swahili words for next time, so that I can understand more of what the mammas and Tanzanian midwives are saying to me.